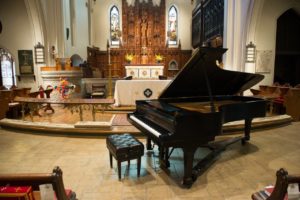 Mark grew up in Minneapolis, Minnesota, moved to Chicago at age 28 and arrived here in Maine on the winds of the blizzard of ’96. He has been an active member of both the Marston-Kotzschmar Club and the Portland Rossini Club since 1996. In past years, he has played a variety of music, has performed solo, four-hand and eighthand compositions, and chamber music, including works for French horn and piano, trios for piano, French horn, and violin, as well as works for voice and piano. He likes to write his own program notes, finding that the process helps him to better understand and interpret the musical works he’s performing. He serves on the Board of the Portland Conservatory of Music. In his professional life, he is an internist and geriatrician in solo practice in Scarborough.

Ruth studied piano for 13 years between the ages of five and eighteen. As a teenager she accompanied choirs, instrumentalists, musicals, and the local ballet society in Princeton, NJ. At Cornell University, she accompanied private voice lessons and musicals. While her major was in Spanish Literature and her career is now in investments and financial planning, music has always been a passion and inspiration. She enjoys collaborating with other musicians on any instrument with a current focus on piano duets. Ruth was a student of the late Richard Roberts. She and her husband have lived in Portland since 1988, and have one son, Peter. She joined the Portland Rossini Club in 2011.

Leah studied piano from the age of 9 and began college as a music major at Brandeis University, where she studied with the French pianist Evelyne Crochet. She later earned a Master’s in Social Work degree at the University of Michigan, and went on to have a career as a clinical social worker and psychotherapist. Music continued to be a passionate avocation, however, and after she moved to Maine in 2006, music once again became central to her life. Since that time, Leah has studied piano with Laura Kargul, and recently earned her Masters of Music degree in piano pedagogy at USM. Leah teaches piano at L’Ecole Franc̡aise in South Freeport and in her home studio in Cumberland Foreside. She is a member of the Maine Music Teachers’ Association, the Marston-Kotzschmar Club, and plays in various chamber groups. She joined the Portland Rossini Club in 2012.

Video from the Club President