Hidenori Inoue is a Bass from Himeji, Japan, known principally for his strong vocal technique and flexibility of repertoire, as well as articulate acting skill. Singing the role of Bonze in Madam Butterfly and Makoto Kobayashi in Jack Perla’s An American Dream, Hidenori made his debut with Virginia Opera and Anchorage Opera in the past season, and performed his first Commendatore in Don Giovanni with Tulsa Opera. 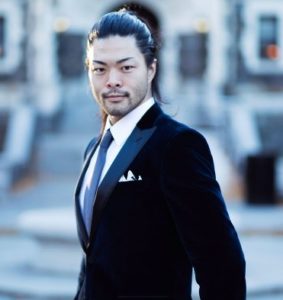 Upcoming performances for the 2019–2020 season include Bonze in Madam Butterfly, Commendatore in Don Giovanni, and Sarastro in Die Zauberflöte with nation wide opera houses in US including his debut with Opera Omaha followed by the concert series with them.

In a robust 2017–2018 season, Hidenori debuted with Tulsa Opera singing the role of Timur in Turandot and covered the role of Méphistophéles in Faust; he also sang as Leporello in Don Giovanni with Opera Steamboat, Makoto Kobayashi in Perla’s An American Dream (East coast premiere) with Opera Maine, Barone in La Traviata with Opera Maine, Padre Guardiano and Marquis in Verdi’s La forza del destino with the New Amsterdam Opera; and Don Magnifico in La Cenerentola with New York City’s ARE Opera.

The 2016–2017 season saw Hidenori as the eponymous hero of Don Pasquale with the Manhattan School of Music, as well as Pistola in Falstaff with the Italian La Musica Lirica, Benoit and Alcindoro in Puccini’s La Bohème with International Vocal Arts Institute, and as Barbemuche in Leoncavallo’s La Bohème.

In 2016, Inoue executed the role of Monstre Cathos in Jacques Ibert’s Persée et Andromède with the Manhattan School of Music. Hailed as “the smoky-voiced bass” by The New York Times and “assertive” by Opera News, this performance was listed in The New York Times as one of the Top 10 Vocal Performances of 2016. The same year, he made his debut as an actor on Netflix Original series “Daredevil” Season 2 with Marvel.

Hidenori Inoue is the finalist of 2018 Jensen Foundation’s competition and Butler Opera International Competition. He holds a Bachelor of Law degree from Doshisha University in Kyoto, Japan, and a Master of Music from the Manhattan School of Music.

Enjoy a brief reception after the concert where you can meet our performers.

There are no tickets for the performances. Admission is at the door with a suggested donation of $10 for adults and $5 for seniors. Performances are free to students.

Limited parking is available behind the cathedral, as well as limited street parking (typically off of Park Street).