The Gould Award An Award for Youth in Music

For sixty years, four talented high school Juniors from Greater Portland, Maine, attended the Metropolitan Opera* in New York City during their February vacation. Each student competed for this privilee by performing classical music, from memory, for ten minutes, before a panel of judges.
Ralph T. Gould established the trip in 1949, because he saw what a difference this experience made to his children, and he wanted to extend the opportunity to other talented young people in the Greater Portland community. Mr. Gould himself, being somewhat eccentric and reclusive, attended opera only once, in Portland, though he listened regularly to the radio broadcasts of the Met. He enjoyed the trips vicariously, through notes sent by the winners and through trip leaders’ written reports.

When he established the prize, Mr. Gould asked the Portland Rossini Club to carry out the details of his award, administering the competition and accompanying the students to New York. Then Rossini Club President, Marcia Merrill, accepted “with pleasure the carrying out of the Ralph Gould Award to send four students and chaperone to New York for two performances of Opera.” 1949 Gould TripShe also acknowledged the receipt of $300 which amply covered the cost of opera tickets, meals, transportation, and at least two nights in a hotel! 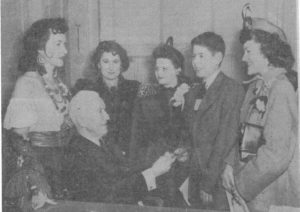 There is a picture in Opera News, April 11, 1949, showing the Gould Award winners presenting a donation from Mr. Gould to Mrs. August Belmont and the Opera Fund Treasurer Ruth M. Leach.

Competition for this prize has, at times, been heavy, with as many as thirty competing for it. Over the years, competition dwindled, reflecting the state of public school music. Presently, numbers are again increasing, and we can expect ten to fifteen competitors. This year there were thirteen talented young people in the running.

Rossini Club President, Marcia Merrill, mother of former Gould Award winner and past Rossini Club President Sally Merrill, was the first chaperone for the expedition, and over the years, many Rossini Club members have enjoyed the privilege of chaperoning these remarkably talented, mature, well-behaved teenagers. For twenty-four years, starting in 1954, Miss Ocy Downs, a piano teacher and performer, led this trip. She maintained a livelycorrespondence with Ralph Gould, and on the trip, kept up an exhilarating pace as she escorted her charges to Broadway shows, Philharmonic concerts, fancy restaurants, backstage tours, and, of course, the Metropolitan Opera. Her trip description became the featured event at the Rossini Club Annual Meeting in May. This writer was privileged to co-chaperone with Miss Downs on her final trip in 1988. Though, at that time, an octogenarian, Miss Downs was still an inspiration for the young people, with her unflagging enthusiasm. 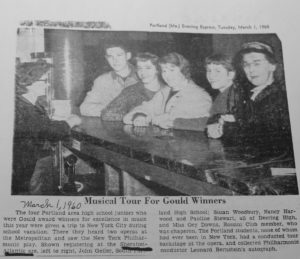 In observance of the fiftieth anniversary, a survey of former winners was sent out in 1998. Of the twenty-nine who responded, eleven went on to be professional musicians, five were studying to be professional musicians, eleven continued to have music as an avocation, and only two were no longer involved in performing music! Most found that winning the competition boosted their self-esteem as musicians. This was a first major audition for most. One, a violinist in Germany, says “I … wore that blazer (with the #10 still in the pocket) for all subsequent auditions – for professional orchestras in Europe, and won every audition. Must have been a good luck number.” 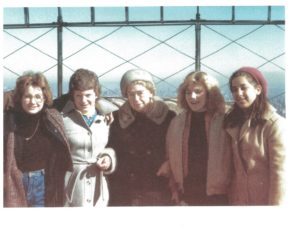 The Sixtieth and final competition was held January 17, 2009, at Woodfords Congregational Church. By this time, Ralph T. Gould had passed away, and funds had dwindled to the extent that we could pay for just two winners and their chaperones. the winners were Nell Britten and Samuel Bagala, who were both pianists. Chaperones were Barbara Graustein and Elizabeth Harmon. They enjoyed box seats for a new production of Il Trovatore at the Met, followed by a private tour backstage and an opportunity to meet three of the four principals: Sondra Radvanovsky, Dmitri Hvorastovsky, and Dolora Zajick. On Saturday, they explored Central Park as well as had a horse and buggy ride around New York, then attended the opera, Adriana Lecouvreur at the Met. That evening they attended the New York City Ballet which performed a trio of ballets, entitled Concerto Barocco. Sunday morning, we taxied to St. Thomas Church, with its wonderful wood carvings and beautiful stained glass windows, heard its boy’s and men’s choir rehearse and attended the Anglican service. We then boarded an Amtrack Accella Train to Boston and a bus to Portland.
~Elizabeth Harmon 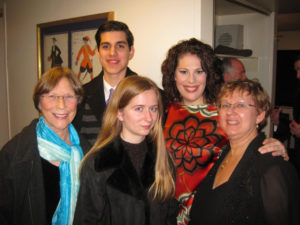 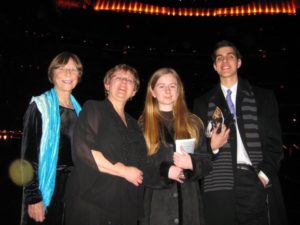